From Philly With Love: An Interview with G.Love

The late July heat hung heavy in the air as I stood shirtless atop my roof, stretching desperately for cell service, when suddenly there was life on the other line. Garrett “G.Love” Dutton’s voice, with his signature twang and fun-loving flow, rang through the crackling static in spurts “went surfing – opened the door –first record – Philadelphonic –his own —rest is history”.

What sounds like threads to an unfinished mad lib is actually an abbreviated answer to how he met Jack Johnson.

Journalistic integrity prevents me from paraphrasing an attempt at what I’m pretty sure he said, but the fuzzy fragments from our phone call demonstrate how details are secondary, or sometimes insignificant, in the larger than life masterpieces painted by people with a palpable passion for life. Garrett’s music manifests that feeling and draws from all it’s contrasting colors, mixing his summits with his sorrows and blending his emotions with his experiences till they combine into a uniquely soulful shade of blues based hip-hop rock.

Garrett’s style of songwriting finds inspiration interwoven into everything and everyone, letting song ideas incubate until they come to life; whether it is a playful love song to cold beverages or a poignant breakup ballad to an ex-lover. It’s an all-inclusive creative approach, that’s actually more an attitude, drawing no distinctions between himself and his art while allowing his musical muses to slowly marinate until they spontaneously sprout into song.

For Garrett that uncontrollable creativity sometimes strikes while surfing, and that inspiration was infectiously intact as AKcreative caught up with him fresh out of the water and on his way to sound-check in San Diego to discuss celebrating the 20th anniversary of his first album, songwriting with Cody Simpson, and the magic of capturing creative epiphanies. 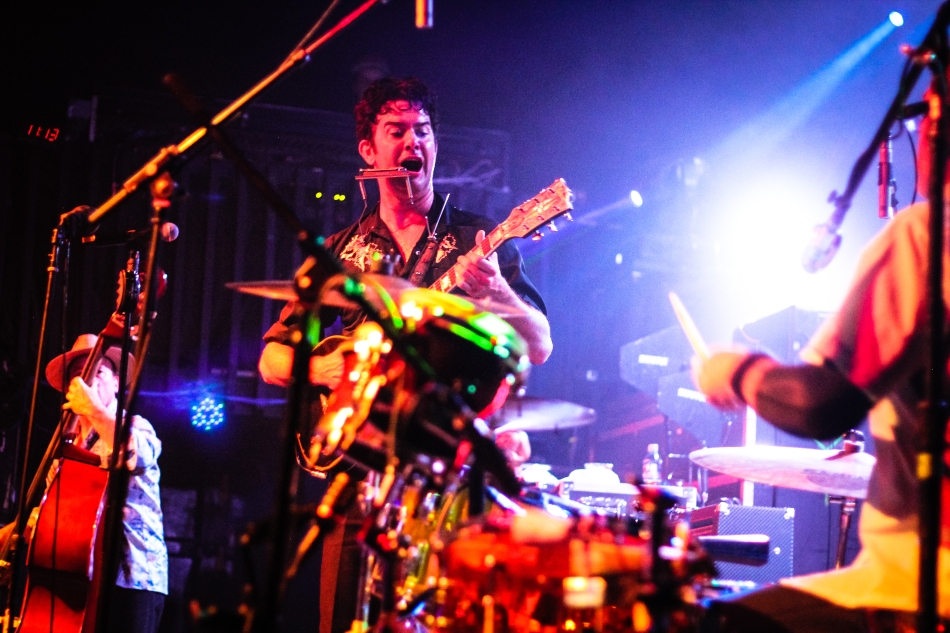 AKcreative: How was your evening surf?

Garrett: [Laughter]. It was good. Actually the waves were kind of soft, but it was just nice to get out there and get wet.

Do you ever find yourself writing songs or getting inspired while you’re out on the water?

Actually, yeah I do that quite a bit. Something about being out in the water, you know, you’re surfing out there alone, and you just kind of set your mind free. A lot of times, like I get a song idea when I’m out surfing, and then I’ll just sing it over and over again in my head so I don’t forget it, you know.

And then, like, praying is something that I think is good, to say a prayer that I don’t forget it, and I’ll just keep repeating it over and over my whole session. Then the minute I get out of the water I’ll sing it into the phone real quick before I forget it.

Is there one particular song you can remember that you wrote that way?

I’m trying to think of any ones that have been on my record that I started out in the water. There are some that may have then made the record, and I don’t know, man. It could be surfing, it could be walking down the street, but, I mean that’s kind of like how the songs come about, you know, just kicking down the sidewalk and you get a phrase or a little melody in your head and you start whistling it, singing the words, or just freestyling.

You know, it’s just great to have an iPhone now because you can just record it straight into your phone. And, I mean, back in the day I used to carry around one of those mini dictator things, and I think as a songwriter, you always have to make yourself available to catch those moments when they come. Those moments of inspiration are one of your writing tools, you know, you want it to be real, right? You want it to not be contrived. You want it to be something that’s spontaneous.

It seems like living is innately what inspires you. But is it difficult to remain actively inspired as an artist? Especially as you celebrate the 20-year anniversary of your debut album.

That’s a good question. I mean, yes and no, I feel very strongly that songs should be inspired. So, you know, I don’t often just write for the sake of writing, or if I do start writing and become uninspired I’ll basically move on to something else. I feel like I’ve done that a lot over the years. I’ve tried to force a song and you know what? They just end up being bad, but it’s good to do that practice as a songwriter. To go okay, I’m going to write this song and I’m going to fill it out.

I’m kind of hitting a wall, but I’m going to plow through that wall, and after 20 years I have a lot of songs, so I really like to let them come organically now. That doesn’t mean when they come organically I don’t put a lot of work into making them something super special after that initial creative burst, but these days I kind of just wait for them to come, and that way I know, or I hope, that everything is going to be of a pure inspiration. So I think I kind of am into a quality over quantity approach these days.

Even with that approach, you wrote a total of 40 tunes for Sugar then mined that down to 16 final tracks.

You guys are already exploring even more of the songs you sacrificed for Sugar on the Sweet ’N Blues EP you recently released, and I’d imagine there’s possibly more that could maybe be made into some sort of “Splenda” album.

[Laughter]. The Sweet ‘N Blues EP we just released is all the outtakes of Sugar. But, we actually just did record another record, and I  just got the finished mixes today. The record is called Loves Saves the Day, and it comes out October 23rd.

Sugar has just been an awesome record for us, but we had an opportunity to record another record. Honestly didn’t have as much time in between the last record and this one, but this record was a cool record for us because I really had some good tunes that I wanted to record, and actually, we really came together as a band on this record and wrote some awesome tunes as a band. I think some of the favorite ones are some of the songs that Jim, Jeff and I wrote together off the new batch that are coming out in October.

What inspired you to rework some of your lyrics from “City Livin ” off of Superhero Brother into the track “Too Much Month” off of Sugar?

“Too Much Month” is a song that’s written by my old rapping partner Jasper, and he had that song for a while and I always liked it, then when I wrote City Livin’ I kind of just dropped that phrase into the song “City Livin”. So, you know, kind of quoting off my friend’s song

Along the same lines of writing with friends, what was it like working with Cisco Adler and Cody Simpson on the song “Love Yourself”?

Yeah, Cisco is a long-time friend and I just wrote with him this spring for this record. He’s one of these guys that’s a natural connector, and he’s always got something going. So whenever he calls it’s a, “Hey, do you want to do this?” Yeah. I usually will say yes. It was a really cool session. I had that song, and actually that was one that I was going to record on my new record, but it was just kind of the timing of it. I was pretty hot on that track. So they said, “Oh, well, do you have any ideas?” because we’re going to write a song and record it that day. So I said, “Well, I’ve got some ideas of songs that I’m kind of working on,” and Cody chose the song “Love Yourself”, and I figured that fit along with kind of like his vibe and his message, and so we kind of started with this song that I had existing, and then we did kind of rearrange it a little bit and readjust it, rewriting some of the lyrics, we cut it, and it was really cool. He’s actually a super nice guy, great singer, a good writer, and he’s handsome as can be, and, you know, was dating a super model. So all signs point to rock stardom for Cody Simpson. 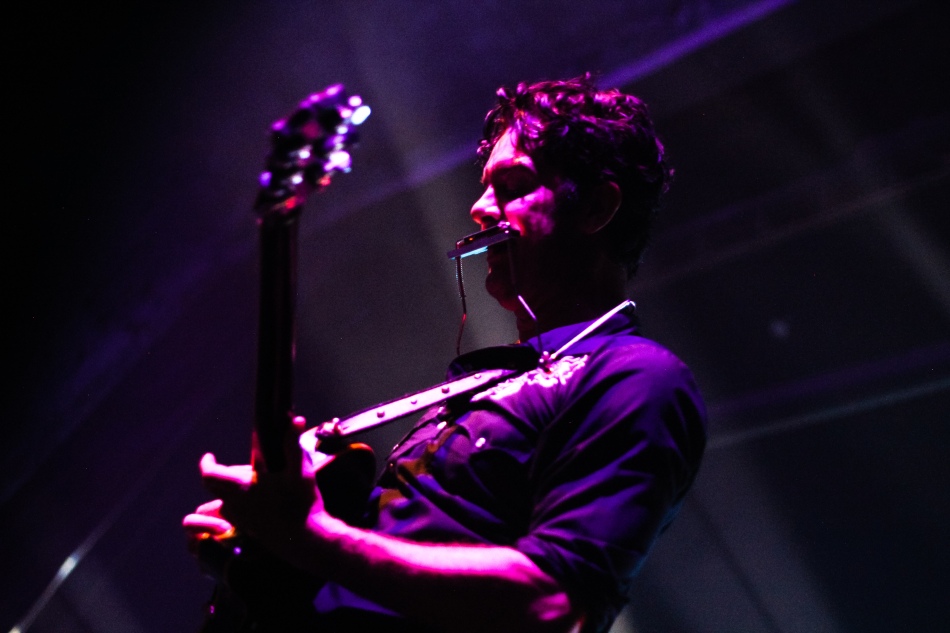 Going back to some of your  rock stardom and relationships, I read in a past interview about your Gibson J-45 having to be reconstructed after getting thrown out of a fourth story window in New York. Was writing the album and digesting that heartbreak almost like reconstructing yourself?

Yes. I mean, in a way. It’s funny because the Sugar record was initially going to be a lot of heartbreak songs, with just songs about kind of breaking up relationships and then it ended up turning — it ended up changing. There’s every kind of song, and I did some co-writing, so you have a song like from Jasper, who has been a struggling musician, just wanting to make music, singing about “I want to pour my heart into my art, and Lord knows I’ve been trying, but I’ve got too much month at the end of my money”.

And then you’ve got Dan Reynolds of Imagine Dragons, he and I wrote that song” Nothing Quite Like Home”. He was really coming at it like, wow, I’m a rock star now. I never knew I’d miss home so much from the fast lane.

On the new record Love Saves the Day, I feel like the songs, a lot of them were inspired by, you know, getting my heart broken and going through a lot of long-term emotional, distraught from a past relationship. A lot of people go through it, and you’re going to live, but you somehow have to step back, and for me, music’s still a major element of that. Although I don’t think it comes across as depressing, I think that it’s kind of really bad ass. There’s happy stuff on it, but there’s some angry stuff on it too, and I think the Love Saves the Day record is like our heaviest, bluesiest, ‘rock-and-rollist’ record, and  it’s pretty — it’s hot.

What would you like to tell your fans who will read this interview, or the ones who are see coming to see you on stage tonight in San Diego?

I’d just like to tell them thanks so much for the love. And, you know, 23 years, we really couldn’t do it without them. It’s that enthusiasm and that love that we get from the people that keeps us going, and keeps us creating music, and keeps us hot on stage and wanting to be on stage. And, you know, we always strive to give them the very best of ourselves. We just want to send love out to those people.

If you’d like to share in some of that love Garrett will be playing at the Ogden Theatre in Denver, Colorado tonight and is touring throughout the country till mid April. For tickets and additional tour info click here, and enjoy his bluesy black and white video for “Nothing Quite Like Home”.