Catching Up With Conspirator (SPINR Magazine #3)

Catching up With Conspirator

It’s a frigidly cold Colorado night as plumes of smoke scurry away with the wind whipping through the back alley of The Aggie Theater. Marc Brownstein of Conspirator stands shivering amidst streaks of snow answering a fan’s question about his age by saying, “it’s like the wind-chill factor, I’m almost 40 but it feels like 25.” As that iconic smile stretches across his face, it’s evident that Marc embodies this youthful, optimistic outlook, enabling him to both possess the wisdom of a jam-band veteran while preserving the ambition of a musical rookie.

Marc started the Disco Biscuits back in 1995, but despite all his accomplishments through the years he says, “I don’t feel bored at all making music.” This creative restlessness has resulted in him starting up multiple musical endeavors (Conspirator, Younger Brother, SuckerPunch), co-founding a non-profit to promote voter registration (HeadCount), establishing and headlining a highly successful music festival (Camp Bisco), composing a rock opera (Chemical Warfare Brigade), hosting a radio show (Jamtronica on Sirius XM), and remixing hip-hop albums (Ski Beatz vs. The Disco Biscuits).

Marc’s current focus is Conspirator, which has gradually grown from being considered a side project into a full-fledged band with it’s own sound and fan base. “I’m starting to see it turn from a thing that our old fans used to come to see just as a novelty because we were in it, into really having it’s own identity,” Marc says. “We’re trying to do something completely different and when you’re starting something new, you don’t know if it’s going to be popular. You just put your heart and soul into it, then promote it and believe.” 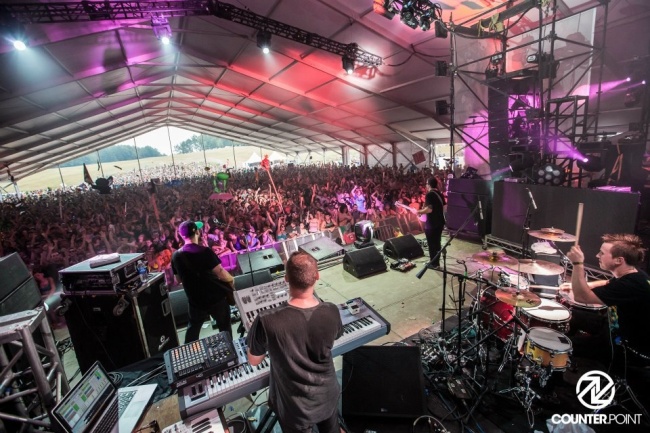 That constant belief and promotion has paid off with the recent release of Conspirator’s first studio EP, Unleashed, as well as a 28-city tour and a full festival season this summer to back it. There’s no telling what their future holds, but with that much momentum, it’s clear that they don’t plan to slow down or stop anytime soon.

Newton’s first law of motion states that bodies at rest tend to stay at rest, but when Marc Brownstein rests, he tends to make more music. Consequently, Conspirator was born in 2004 during a brief hiatus from touring with The Disco Biscuits, when fellow Biscuit, Aron Magner, who Marc refers to as his “musical soul-mate,” first proposed the project.  The idea took off and allowed them to guide their well-honed creative chemistry in a different direction. This departure from The Disco Biscuits developed a unique sound that strays away from a jam-oriented style, yet maintains the same spirit of eclecticnes and excitement. “We wanted to make electronic music with an element of surprise,” Marc says, “playing with the beat and adding in all kinds of stuff that all comes together to create a whole new genre.”

Genre is a tricky word when it comes to Conspirator. Their music encompasses a wide range of rock and electronic elements that fuse together to form a sound that orbits around, “a heavy, electronically produced core with a skillful and melodic homage to instrumentation.” Marc is quick to sight Simon Posford of Shpongle as one of the forefathers of this type of live electronica. “ He is a huge influence of mine and also one of the guys who gave us the idea that this was something that could be done.”  Conspirator continues to build off of what Posford pioneered and their diverse audience is a testament to the way their music bridges genres.

Conspirator’s crowd encompasses all ages and types of fans. Ranging from middle-aged men who hired babysitters to come to catch a couple of their favorite Disco Biscuit’s play, to neon-clad college kids unaware of the band’s past. “Sometimes we’ll meet kids and have to explain to them who we are,” Marc says, “That’s my favorite thing, people just being there and loving a new band when they don’t know about our other band or the last 20 years.”

Having just turned 40, the topic of age is inescapable, yet rather than pondering the past, Marc chooses to focus on the future. When asked about his opinion on age, Marc replies, “To answer your question, Phil Lesh just turned 73 the other week and that guy still throws down hard for four hours. I see him as inspiration to be somebody who just has the longevity and also Miles Davis as somebody who was not afraid to completely switch things up and change the way they make music.”

While Marc may disprove Newton’s first law of motion, he personifies the theory that the only constant is change, and also ‘haters’. “Don’t let the haters get you down, because if you’re going to be anything, you’re going to have haters. Since before the Internet, there were haters, but you shouldn’t give up if somebody else is telling you it’s not there. We had an OG hater back in 1997 who was at a show and said, ‘I’m in the music industry and you guys don’t have it. Go back to school and don’t quit your day jobs,’ which just fueled us and we were like ‘Screw that guy, we’re going to be successful on our own terms with our own sound’.” Conspirator has managed to transcend the haters, and thanks to a positive and progressive attitude, they’ve prevailed. “It’s all tied into dedication. That’s the key-practice hard, never give up, and be yourself. ”

To view a digital version of this article in issue #3 of Spinr Magazine click here (pg.12).

This entry was posted on May 14, 2013 by austinkoontz. It was filed under Aggie Theater, Austin Koontz, Conspirator, Marc Brownstein, Spinr Magazine and was tagged with Conspirator.